Dairy milk is one of the richest foods that exist. It contains a wide range of essential nutrients such as protein, calcium, phosphorus, riboflavin, niacin, pantothenic acid, vitamins A, D and B12, among others.

Unfortunately, for various reasons, not everyone can drink dairy milk. Some people are lactose intolerant; some are vegan, while others dislike it.

If you fall within any of these categories of non-dairy-milk-drinkers, the good news is that you can drink soy milk in its stead.

Soy milk is a wonderful alternative to dairy milk. It contains some nutrients that are also found in dairy milk such as protein, vitamin A and potassium.

Despite its purported benefits, soy milk is one of the most controversial foods. There are several science-backed health concerns regarding the consumption of soy milk.

If you want to find out more about these disadvantages of soy milk, get comfortable and read on, will you?

HOW MUCH SOY IS TOO MUCH? 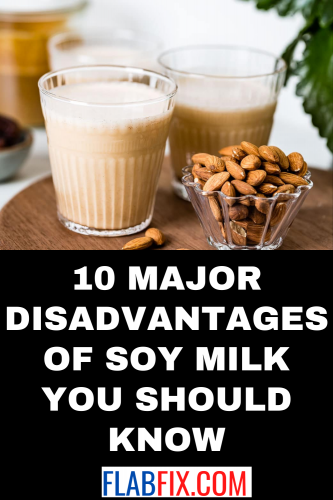 Generally, soy is a nutrient-dense food packed with a lot of essential nutrients. It is also associated with a couple of health benefits that may be good for you.

Since everyone is different, it is difficult to come up with an exact standard amount of soy that you should consume in a day, but going overboard is certainly possible.

However, it is highly recommended that you moderate your soy intake if you are a regular soy consumer to avoid suffering its negative effects which will be discussed later in this article under the disadvantages of soy milk, one of its most popular food products.

The American Institute for Cancer Research (AICR) recommends taking up to three servings of whole soy foods in a day to moderate its consumption.

It is also advisable that you avoid richly concentrated soy products like soy protein isolate because such products are overprocessed to the extent that they are almost pharmaceutical rather than organic.

For this reason, they may lack certain nutrients found in whole soy products.

Soy milk is indeed good for weight loss, the reason being that it contains fewer calories than dairy milk. It also has a lower sugar content compared to dairy milk.

A research study in the International Journal of Preventive Medicine found that soy milk plays an important role in reducing waist circumference in obese and overweight women.

IS SOY MILK BAD FOR FEMALES?

There seems to be a lot of controversy regarding whether or not soy is safe for females.

While some claim that soy promotes female reproductive health, another purport that there are many serious soy milk side effects in females.

Soy contains phytoestrogens or plant-based estrogens which occur in form of two main isoflavones, daidzein and genistein. These phytoestrogens also act like estrogen, the female sex hormone, within the body.

Since estrogen virtually plays a huge role in the female reproductive system, this is where the whole soy controversy stems.

Soy isoflavones have been credited with easing the symptoms of menopause caused by a drop in the estrogen level in the body such as hot flushes.

A research study conducted in Tokyo found that soy isoflavones reduce the severity and frequency of hot flushes during menopause.

However, some claim that soy does more harm than good in the female body, alleging links between soy products and some forms of cancer.

Studies seeking to link soy to an increased risk of breast and other cancer forms are inconclusive as they have failed to establish any direct connection between the two in human trials.

The American Cancer Society states that since research on the link between cancer and soy is still evolving, more analysis is needed before concluding that there is a link between the two.

Instead, some studies show that soy could actually reduce cancer risk in both males and females.

A Japan study suggests that hormone fluctuations in men who consume soy daily could protect them against prostate cancer.

Another 2013 study found that consuming soy products and probiotics could reduce the risk of breast cancer in rats.

The bottom line is that there isn’t enough science-backed evidence that soy products, including soy milk, significantly increase or decrease cancer risk.

The position on the benefits or otherwise of soy in the female body is still largely unclear.

IS IT BAD TO DRINK SOY MILK EVERYDAY?

As mentioned earlier, it isn’t easy to figure out exactly how much soy you should have in a day.

Like every other soy product, soy milk should be consumed in moderation to avoid experiencing the side effects of taking it in excess amounts.

As discussed earlier in this article, soy milk is an amazing food packed with plenty of essential nutrients that your body needs, and there’s no reason why you shouldn’t drink it.

Well, except for these 10 disadvantages of soy milk, you should be aware of before indulging in it.

Soy milk contains phytic acid, which can interfere with your body’s ability to absorb essential nutrients like zinc and magnesium.

Soy milk has several protease inhibitors that slow down protein synthesis in the gastrointestinal tract.

These protease inhibitors interfere with enzymes chymotrypsin and trypsin, both important for protein digestion and absorption.

When your body breaks down soy, it leaves a mucus-like coating along the gastrointestinal tract that may affect respiratory functions.

Over time, the excess mucus left along the tract can exacerbate asthma and cause sinus problems.

Majority of the soy produced to make soy products are derived from genetically modified crops.

Genetically modified crops can be linked to causing antibiotic resistance in the body.

One of the gravest disadvantages of soy milk is that it can impair thyroid function in your body if taken in excess.

The isoflavones in soy milk may deplete iodine levels in your body, impairing thyroid function and putting you at risk of developing hypothyroidism.

If your iodine intake is generally low or underactive thyroid, it is advisable to seek advice from your doctor before indulging in soy products such as soy milk.

Due to its high protein content, soy has a reputation for causing gas in the stomach during digestion.

Soy milk may increase the risk of developing kidney stones because it contains large amounts of oxalates which are the main cause of kidney stones.

Soy milk can increase the risk of blood sugar levels becoming too low in people with diabetes who take regular medication to control their blood sugar.

Diarrhoea is one of the most common cons of drinking soy milk.

Soy milk contains insoluble fibres which may cause stomach discomfort and diarrhoea to sensitive individuals.

Soybeans are one of the most common allergenic foods in the world. Most soy products, including soy milk, contain soy proteins known as glycinin and conglycin which trigger allergic reactions in the body.

For this reason, it is not advisable to drink soy milk if you suspect you have a soy allergy.

As much as it is nutrient-packed and associated with certain health benefits, the disadvantages of soy milk are also worth considering in deciding whether or not you should include in your diet.

If you are a weight watcher and choose to include soy milk in your diet, make sure to go for unsweetened forms. Sweetened versions contain around 5 grams of added sugar per serving, making you put on unwanted weight if you drink them regularly.

It is also important that you read the soy milk label before buying it to ensure it is fortified with calcium (which soy milk doesn’t contain naturally) and vitamin D.

Don’t forget to consume it in moderation to avoid experiencing the side effects of soy milk, such as those mentioned in this article.