Aspartame is an artificial low-calorie sweetener that scientist James M. Schlatter in1965 discovered. It is comprised of two amino acids, phenylalanine and aspartic acid.

The health benefits of a low-calorie diet cannot be emphasized any better. It is with this consciousness that manufacturing companies resolved to use low-calorie sweeteners like Aspartame.

Research also has it that it is 200 times sweeter than sugar, meaning it would take a small amount of aspartame to match sugar’s sweetness.

So it is for such economic and health reasons that its usage cuts across a range of products like candies, chewing gum, yoghurt, beverages, ice cream, and sugar-free food products.

The creation of aspartame was one of the breakthroughs of its time.

After a rigorous test, it was reviewed and approved by global health institutions such as the World Health Organization(WHO), U. S Food and Drug Administration(FDA), American Heart Association, American Dietetic, European Food Safety Authority(EFSA), among others.

IS ASPARTAME SAFE FOR CONSUMPTION? 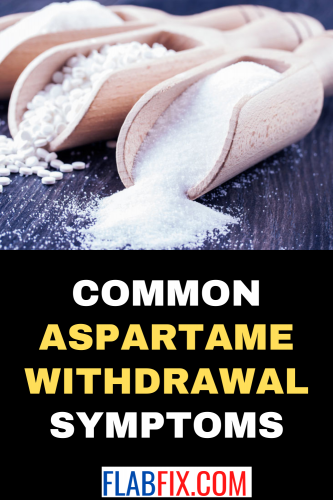 It has also been approved for usage by children, people with diabetes and even pregnant women.

People diagnosed with Phenylketonuria(PKU) should not take it because their body cannot break down excess phenylalanine and release it from their system.

However, some studies have contradicted the use of aspartame as an artificial sweetener indicating that it is addictive and may pose serious health problems to a frequent user.

These studies indicated that consumption of aspartame had side effects such as dizziness, seizures, hyperactivity etc.

It was reported by Dr Allan Gaby, MD, to Alternative Medicine Review that aspartame found on commercial products found on the shelves of our shopping stores could be a seizure trigger.

Aspartame can also be poisonous since it dissolves and travels all over the body before settling within the tissues.

When aspartame is digested and absorbed, it accumulates within the tissues, which poses a serious health threat.

WHAT ARE THE SYMPTOMS OF ASPARTAME POISONING?

These symptoms will differ from one person to another. However, some life-threatening symptoms should be addressed immediately if they occur.

These are some of the symptoms that have been reported.

You may hear buzzing noise in your eardrums, and you notice that you are intolerant to noises. Aspartame poisoning can also lead to decreased vision, especially at night.

Your heart can be racing fast and skipping some beats. You may also get the feeling of catching your breath as in when someone is drowning.

Some people experience stomach upsets that may be characterized by diarrhoea. Your skin may start developing rushes and be itchy.

You may experience menstrual irregularity and hair loss.

Aspartame withdrawal symptoms are the physical effects that may take place when a frequent user breaks away.

HOW TO RECOVER FROM ASPARTAME WITHDRAWAL SYMPTOMS

Could you be wondering how to go about dealing with your aspartame withdrawal symptoms? Please take it easy. Here are some of the guidelines that can be of help during your detoxification period.

Remove products that contain aspartame from your diet and read labels of unfamiliar products to avoid ingesting aspartame unknowingly.

You can go for toxin analysis by submitting a hair sample so that you may know the level of toxins in your body.

Take note of any changes in your body. Ensure you drink enough and exercise regularly.

Eat food that is rich in the nutrients that your body has lost. Stay positive and enjoy the general feeling of better health.

HOW LONG DOES ASPARTAME WITHDRAWAL SYMPTOMS TAKE TO SUBSIDE?

The severity of these withdrawal symptoms may differ from one person to another depending on factors like the quantity of aspartame consumption and the time span.

Some studies have indicated that it took one to two weeks for aspartame withdrawal symptoms to disappear. Others have one month of recovery.

These are some of the most common aspartame withdrawal symptoms. It should be noted that if you experience an acute increase in these symptoms, consider seeing a medical expert for further directives.

It is the most common symptom of aspartame withdrawal. Headache is a signal that can portray many problems, but it is one of the first symptoms that you might experience.

You need to make sure that you drink a lot of water, but you may use pain relievers if the pain persists.

There is a hormone called dopamine in the brain responsible for motor functions, mood, pleasure, and decision-making, among other functions.

When aspartame is consumed, it stimulates the hormone.

A sudden withdrawal of aspartame from your system may lead to a decrease in dopamine levels in the brain.

Some studies have shown that low levels of dopamine trigger disorders such as anxiety and panic attacks.

Aspartame withdrawal can lead to a decrease in your energy levels, leading to fatigue. However, some reports claimed an increase in energy levels while most people have reported loss of energy and tiredness.

You may have problems in trying to fall asleep or have frequent sleep breaks.

Aspartame withdrawal may lead to an increase or decrease in your weight, depending on your appetite during that period.

These are strong desires to have whatever you are trying to break away from. Substances that affect dopamine will prompt the brain to crave for them.

Aspartame has a side effect of calmness. When aspartame is withdrawn from the system, the brain will send signals for dopamine to be increased, but this may result in restlessness.

CHANGES IN YOUR APPETITE

Aspartame withdrawal may lead to an increase or decrease in your appetite.

Aspartame withdrawal may cause your heart to beat faster than usual, but of course,  like most symptoms, this will soon subside.

This is not a very common symptom though reports show that it is indeed possible to suffer a panic attack.

The controversy on synthetic sweeteners’ safety, like aspartame, is an ongoing debate though scientific research has not discovered proof of danger, making it acceptable for daily use.

Our desire for maintaining a healthy body can drive us into trying out many products. Ever since its creation, aspartames’ safety has been debated.

Our most important goal is to cultivate a lifestyle that can support and sustain our health.  Awareness is vital because it influences our dietary decisions, which impacts our health in different ways.