Sweeteners have long been touted to be the best for diabetics, but there is always a raging debate which of this are the best; stevia vs Splenda.

Both contain sweeteners and have little or no calories making then a good choice to sweeten foods and drinks for people with diabetes.

Over the years, though, the debate has been the best option between stevia and Splenda to give you a sweet taste if you have diabetes.

For starters, stevia is a natural sweetener that is extracted from a plant known as stevia rebaudiana.

Splenda, on the other hand, is produced artificially and branded as sucralose and maltodextrin-made sweetener.

WHAT IS THE SAFEST SWEETENER FOR DIABETICS? 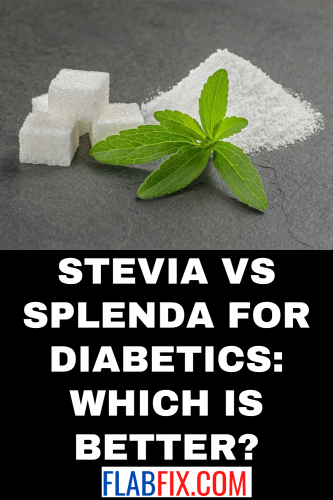 Having no or little calories, stevia and Splenda sweeteners seem like the best option for people living with diabetes.

They do not raise blood sugar as fast as refined sugars.

However, there is a variety of other sweeteners besides the widely known stevia vs Splenda. They include:

Tagatose is a naturally occurring sugar that preliminary findings in studies show may have antidiabetic and antiobesity medication and has the potential to lower blood sugar and the body’s insulin response.

More research on tagatose shows that it may have huge benefits and lacks no major side effect.

Since the 1980s, aspartame has been around, which is considered 200 times sweeter than normal sugar. It is mostly used in baking but isn’t a good option because it breaks down at high temperatures.

It is considered unsafe for people suffering from a rare genetic condition known as phenylketonuria.

Also known as acesulfame K or Ace-K, it is 200 times sweeter than sugar. Its natural form is sour, and manufacturers usually use different sweeteners to coast the sour aftertaste.

Studies conducted in the 1970s showed a correlation between saccharin and cancers of the bladder in tests carried out on rats in the laboratory.

However, recent studies have shown no saccharin trait, causing cancer, according to the National Institute of Health.

Saccharin is between 200-700, sweeter than normal sugar.

It can withstand high temperatures, thus good for baking.

WHICH IS HEALTHIER STEVIA OR SPLENDA?

On a closer look, you realize that one is superior to the other in the stevia vs Splenda supremacy battle. In this case, stevia is widely accepted over Splenda due to the fact that it is naturally produced.

Research shows that stevia contains zero calories and is herbal. It works well with Erythritol, which is a sugar alcohol.

In stevia vs Splenda, stevia comes up as a better option for diabetes because it has no synthetic sweeteners like those found in Splenda.

If you love sparkling drinks free of calories, they contain a safe amount of stevia, while other drinks have stevia with lemon and lime flavours.

Stevia can be stuffed in tea and other beverages for a few minutes and removes in its dried form. These dried leaves can also be ground into powder.

You can also enjoy stevia’s sweetness by boiling the leaves into syrup. It is also great for baking in proper amounts.

It is 400-600 times sweeter than sugar. It contains sucralose, which is an indigestible artificial sugar low in calories.

Splenda contains digestible artificial sweeteners – maltodextrin. This one has no sour aftertaste and comes in liquid form.

Mostly, it is in baking.

The artificial sweeteners added to Splenda makes it not so fit for consumption by a person with diabetes.

Studies published in Frontiers In Physiology Journal and the Indian Journal of Pharmacology stated that it harms the gut microbiome.

It affects the correct working of the gut-brain axis, which then complicates neuronal functions.

A 2018 study published in the Journal of Inflammatory Bowel Diseases showed that continued consumption of Splenda caused inflammation and digestive problems.

You also stand a huge risk of developing Crohn’s disease. Chron’s disease is a type of inflammatory bowel syndrome (IBD).

WHY IS SPLENDA BAD FOR YOU?

Sucralose element in Splenda gives it away in stevia vs Splenda for people with diabetes. This is because sucralose is not fully natural.

The controversy behind long term usage of Splenda by people with diabetes could raise their blood sugar levels and increase insulin resistance.

It may also adversely affect the gut’s bacteria, making it problematic for digestion to take place flawlessly.

Due to its high content of sweeteners, it could lead to sugar cravings that are not good for someone trying to bring their sugar levels under control.

Ore sugar cravings could lead you into the temptation of taking more sugars and, as a result, an increase in weight.

These are cancer-causing organisms in Splenda.

DOES STEVIA CAUSE BELLY FAT?

Studies conducted in the past show that stevia has the likelihood of increasing abdominal fat content.

The glycosides in stevia leaves and stevioside diets have a way of messing up your hormones, leading to abdominal weight gain.

But how does it mess the hormones? The sweetness in it tricks the body that this glucose is the primary energy source in the body.

When the blood sugar level is optimal, the body reacts by preparing to release glucose but doesn’t release it because stevia is calorie-free. What happens is that the liver muscle tissues produce sugar and other body organs such as thymus glands.

This ends up being a hypoglycemic issue where the body is deprived of glucose, which affects the hormones that release sugars from other body organs. The accumulation of these body sugars ends up as abdominal fat.

On the stevia vs Splenda question, stevia tops as the best option in it all, albeit in moderate amounts.

The natural extraction of stevia makes it even better for a person with diabetes because it is void of artificial sweeteners, which causes a spike in blood sugar levels.

Splenda, on the other hand, is selective. It could react differently to different people, especially those who have diabetes.