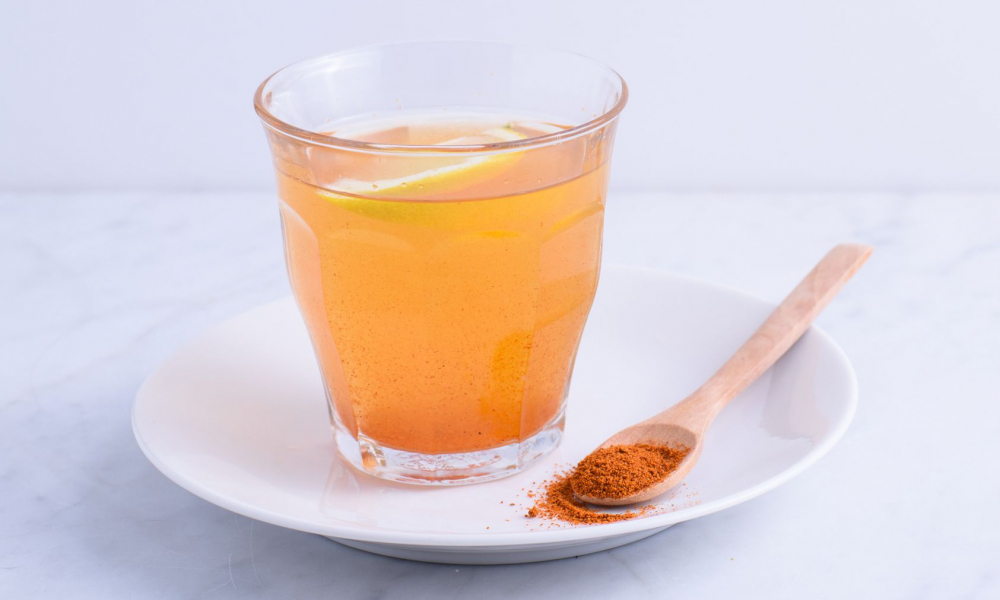 By Dorcas S
Leave a comment
In Nutrition, Wellness
0

Apple Cider Vinegar (the unfiltered kind with all its minerals, enzymes, and good bacteria) is essential in promoting a healthy diet and detoxification processes.

Likewise, cayenne pepper is renowned for its health and cleansing properties.

When you combine these two ingredients, you create a powerful elixir that has double the benefits that you would normally reap from just one of them.

HOW TO MAKE APPLE CIDER VINEGAR WITH CAYENNE PEPPER DRINK 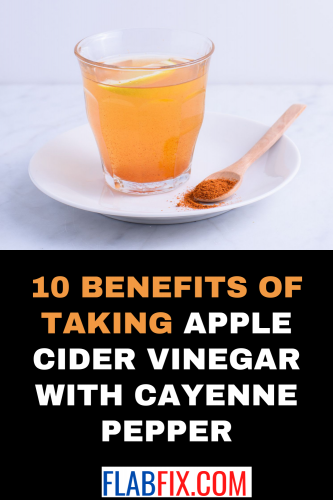 Most people combine 1 tablespoon of apple cider vinegar with just a dash of cayenne powder and then add warm water (an ounce is sufficient).

You may then refrigerate and take it the next day.

You don’t need to overdo it with this drink. Taking it just once in the morning before your first meal is a great way to benefit from this healthy mix.

Cayenne pepper is a hot spice which increases energy expenditure as shown in this research.

Likewise, apple cider vinegar has a productive effect on your metabolism. It causes your body to use up the sugar and fat that you consume.

If you have a slow metabolism and have been struggling to lose weight, this combination of ACV and cayenne pepper could help to change that.

Apple cider vinegar contains potassium which is highly effective in minimizing mucus viscosity. Therefore, if you have a stuffy nose, it will help in relieving symptoms.

Likewise, if you are always susceptible to nasal blockages, you could take apple cider vinegar to eliminate the bacteria that will lead to this flu.

The same thing applies to cayenne pepper. It is quite helpful in eliminating nose congestion.

Cayenne goes a step further to deal with other symptoms of colds and flu. If you struggle with headaches and sinuses then taking apple cider vinegar with cayenne pepper can alleviate that.

This highly potent combination of apple cider vinegar with cayenne pepper helps deal with viral or bacterial infections that lead to illnesses.

When you take cayenne peer, it boosts your immunity, thus enabling it to fight potential illnesses. Similarly, when you ingest apple cider vinegar, the drink provides an alkaline environment which is not the best for bacteria or viruses.

Put together, this strong mix can make you less vulnerable to infections and will thus reduce any need to visit a hospital.

On its own, apple cider vinegar is a proven remedy to fight skin conditions. According to this study, the antimicrobial properties of ACV make it ideal in eliminating skin complications which come from viral, fungal or bacterial attacks.

In association with the above, cayenne pepper is specifically helpful in treating psoriasis tied to immune system flare-ups.

Together, these two remedies are highly effective in improving the health of your skin.

Experiments have proven that the active substance in cayenne pepper (capsaicin) is essential in reducing the desire to eat. This means that you are more likely to make healthier food choices when you take cayenne pepper.

If you combine the above spice with ACV, you will get an extra boost because of its effect on blood sugar. ACV tends to reduce blood sugar in your blood, thus minimizing the tendency to feel hungry.

These two substances are thus essential in making your weight loss efforts last.

Stomach complications like bloating, constipation and diarrhoea sometimes arise because of the environment therein. Some people get bloated because there is an excess buildup of bacteria which thrives in the wrong PH levels.

Apple cider vinegar helps to correct this imbalance and thus gets rid of stomach problems.

Cayenne pepper also works in a complementary way. It deals with acid problems and thus helps to make your digestive enzymes work effectively.

Apple cider vinegar with cayenne pepper is a super combination for gastrointestinal problems.

This stems from the fact that cayenne pepper contains alkaloids and flavonoids to neutralize acids and help in circulation.

Likewise, ACV has a series of probiotics enzymes and minerals essential in removing unwanted chemicals from your body. This is especially true after eating too many processed, sugary or fatty foods.

Take a mix of apple cider vinegar and cayenne to detoxify your system effectively.

Acid reflux is a common problem that individuals who eat spicy or fatty foods have. Furthermore, when you sleep, the lying and bending positions make stomach acid to move up your gut and thus leads to heartburn.

Apple cider vinegar is quite effective in dealing with reflux by balancing stomach acid. Cayenne pepper is also helpful in stimulating digestive juices such that your stomach acid is put to good use.

The overall result is that you are less likely to suffer from heartburn and all other acid reflux symptoms.

The combined effects that apple cider vinegar with cayenne pepper has on weight loss are tremendous.

First, cayenne pepper reduces your appetite and enhances your metabolic rate such that you are more likely to use fat as a fuel source than sugar.

In combination, these two ingredients are highly likely to get you to your weight loss goals. However, you must combine them with other lifestyle changes.

According to this study, people who went on an apple cider vinegar intervention experienced a reduction in waist circumference and weight.

10.  COULD HELP TO MANAGE PRE-DIABETES

People with pre-diabetes often struggle to manage their glycemic load. In other words, when they take foods like carbs or starch that have a high glycemic index, their blood sugar level will rise.

However, if you take apple cider vinegar with cayenne pepper, you could eliminate this problem. You would thus alleviate pre-diabetes.

In the following research, it was shown that consuming ACV positively affects the management of blood sugar levels among pre-diabetes candidates.

If you have weight loss concerns, then apple cider vinegar with cayenne pepper could be just what you need. Not only will it raise your metabolism and curb your appetite, but it will also help to manage blood sugar for you to eat less.

Additionally, this super combination creates a double barrier against a myriad of infections and illnesses. It can guard against flu and deal with nasal congestion when they occur; it tackles stomach problems and is effective against skin problems development.

People susceptible to diabetes because of blood sugar problems are also prime candidates for taking this drink.