Probiotics refer to live microorganisms (usually bacteria) ingested in precise quantities to confer benefits in your gut. These include multiplying the number of good bacteria that are essential in destroying disease-causing pathogens.

Probiotics may take the form of dietary supplements, natural foods or drinks like yoghurt.

A substance is only a probiotic when it has the ability to remain alive in the abdomen’s acidic environment. Furthermore, it needs to increase the number of good bacteria in the gut.

Usually, when a probiotic enters the body, the microorganisms attach themselves to your small intestines. They then release chemical substances that destroy bugs that cause diseases.

Theoretically, probiotics can reduce inflammation, minimize susceptibility to heart problems and other lifestyle diseases and generally boost your health. However, evidence for the pros and cons of probiotics ought to make you think twice about taking them.

ARE PROBIOTICS REALLY WORTH IT? 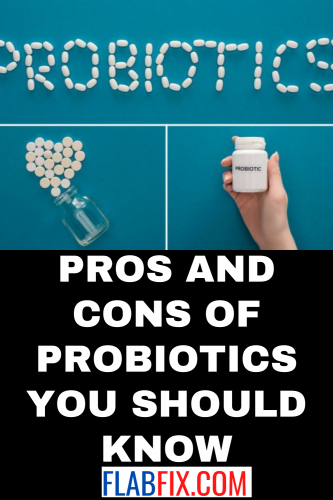 To know whether probiotics are really worth it, you need to ascertain that they make the changes that their producers purport.

In this clinical study, it was shown that when probiotics enter the body, they alter the chemical compounds that the gut produces.

Furthermore, it was proven that there are healthy changes that occur. Nonetheless, those changes were based on the person’s health under consideration and the bacteria that the person already had in the gut.

It is thus not prudent to make a blanket statement about probiotics. When assessing whether it is worth it, you must consider your individual circumstances and customize the probiotics to suit your health needs.

IS IT OK TO TAKE PROBIOTICS EVERYDAY?

Yes. Most probiotics are supposed to be taken daily for maximum efficacy.

When you take probiotics daily, you increase the chances of deriving benefits from them. Furthermore, because the substances are made from natural products, they are unlikely to cause dependency.

You may thus take probiotics daily.

PROS AND CONS OF PROBIOTICS

1. HELPS TO REDUCE DIARRHEA AND CONSTIPATION

Probiotics have a profound effect on this gastrointestinal problem.

If a probiotic has the substance Lactobacillus rhamnosus GG, it can be especially helpful in managing and eradicating diarrhoea.

In this systematic probiotics review, it was shown that probiotics among hospital patients helped reduce infections from Clostridium difficile; it is responsible for the prevalence of diarrhoea.

This was especially true if patients consumed it as close as possible to the dose of antibiotics they were taking.

Aside from diarrhoea, antibiotics are also helpful in minimizing problems with hard stool or constipation.

This works by reducing the amount of time that stool spends in your system by increasing the number of times you pass bowels and improving your stool’s consistency.

According to this report, it was shown that people who have irritable bowel syndrome might have some promising options in taking probiotics to manage their symptoms.

Some of these include bloating, stomach pain and discomfort, constipation or even diarrhoea.

2. COULD STRENGTHEN YOUR IMMUNITY

One of the major selling points of probiotics is their effect on your immune system.

It has been stated that probiotics help strengthen the immune system and eradicate certain minor infections like flu and cold cases.

In this study, it was shown that probiotics could have a mild effect on the occurrence of acute upper respiratory tract infections.

However, it was not certain whether the effects were significant enough to change time off from school or work.

People with heart problems can experience modest results when they take probiotics.

It has been shown that depending on the dosage; there could be some moderate effects on patients with high blood pressure.

1. MAY DELAY RESTORATION OF NORMAL BACTERIA AFTER TAKING ANTIBIOTICS

Even though the pros and cons of probiotics exist, sometimes, what may be perceived as a benefit can actually be a downside.

However, in this research, it was shown that the opposite actually happened.

Subjects were divided into two categories; the first consisted of individuals who took antibiotics, while the second took faecal transplants with individual bacteria.

It was found that the people in the probiotic group took 6 months longer to reach their normal level of bacteria.

Conversely, those not on probiotics only needed a few days for their biome composition to return to normal levels.

This indicates that probiotics may actually slow down the restoration of gut health, and that should be a good enough reason to make one rethink their choice to take it.

2. MAY CAUSE SIDE EFFECTS

Some of the pros and cons of antibiotics have to do with your body’s reaction to them. Some people experience abdominal pain when they take them because of their reactions in the gut.

When you take probiotics, they will ferment the sugars that you ingest. The byproduct of fermentation is often methane and hydrogen gas, which causes a lot of bloating.

You may thus end up experiencing stomach pain when you take probiotics instead of relieving the pain.

What’s more, probiotics can cause a buildup of lactic acid, leading to brain fog. In some people, this may even bring challenges with cognition.

3. COUNTERACTS WITH OTHER MEDICATIONS OR CONDITIONS

If you are immunocompromised, you could be setting yourself up for problems. Probiotics may sometimes overstimulate metabolic pathways, and that could trigger an unwanted ripple effect.

Some people are already ill and susceptible to some of the drug’s side effects, such as gastrointestinal problems. Therefore, taking them could make symptoms worse.

Children and pregnant women are also particularly vulnerable to the pros and cons of probiotics. Therefore, these groups should stay away from them.

The greatest challenge with probiotics in the US is that they are supplements. Therefore, they are not as scrutinized by the FDA as pharmacological drugs.

This is even though they act like medication and have various effects depending on the dosages and strains taken.

It is thus advisable for one to be cautious about using them because marketed effects often depend on the strains of bacteria contained and the dosages.

In fact, most research studies may not yield purported outcomes for individuals because the above variables may change.

The pros and cons of probiotics are a mixed bag. There is tangible scientific evidence for taking probiotics like reducing the likelihood of gastrointestinal problems such as diarrhoea, constipation and IBS.

However, the above benefits can also be a side effect of probiotics because some people have reported bloating and stomach pain after taking them.

Probiotics help strengthen immunity and reduce upper respiratory infections even though this effect is modest. Additionally, persons with heart problems can reap benefits from taking it.

It is necessary to take precautions if one’s immunity is compromised or already vulnerable to certain conditions.

Overall, taking probiotics is something that individuals and their medical practitioners should decide as it could go either way.