12 Effects of Going on A Meat Detox

As the name alludes, a meat detox refers to sticking to a diet plan containing meat. This can be done for various reasons.

For instance, while preparing for the switch to a plant-based diet, it is suggested that you go on a meat detox. This is to help you kick meat completely out of your diet and ease your transition.

This is considering we live in such a huge meat-eating society, so you might find it hard to go vegan. However, a meat detox will ensure you stay committed to a plant-based diet.

A meat detox can also be done to trigger the body’s cleanse mode to get rid of the accumulated toxins.

This is because, just like plants, meat has naturally occurring toxins that, if allowed to accumulate, can be harmful.

According to people, for the ethical treatment of animals (PETA), meat consumption increases your chances of consuming contaminants, i.e., bacteria and carcinogens.

That said, there are numerous benefits to eating animal protein as well. Therefore, when you stop consuming meat, the body struggles to adjust without said nutrients.

EFFECTS OF GOING ON A MEAT DETOX 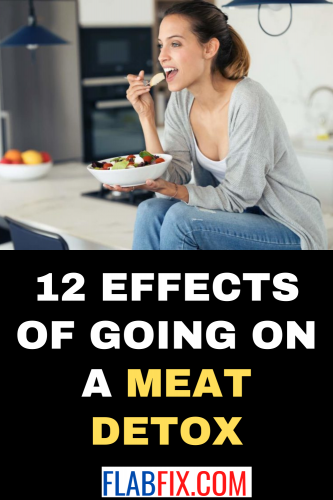 We thus look at some of the effects of going on a meat detox.

By going on a meat detox, you naturally make the switch to a plant-based diet. These diets often contain high-fiber content i.e., from cruciferous vegetables or whole grains.

Fiber is an indigestible carbohydrate made up of sugar molecules that pass through the digestive tract undigested.

As such, they end up fermenting in the lower gut producing intestinal gas that can cause stomach discomfort.

A vegan diet is full of various nutrients that are beneficial to the body. However, there are limitations to them.

This is because nutrients are found in a diet with meat that is difficult to replace or replicate in a plant-based diet.

For instance, a diet that contains meat is high in iodine, zinc and vitamin B12. These are nutrients that are hard to come when foods such as meat and seafood lack from your diet.

As a result, this leads to deficiencies of these nutrients. This could lead to conditions such as goiter. Therefore, it is recommended that you incorporate standalone vitamins until you can figure out how to incorporate these vitamins back into your diet.

The body works like a clock. Once you get used to something it becomes like a cog in a watch, a small part in the grand scheme ensuring everything works together with accuracy and timeliness.

However, when even one thing is taken away the whole system can crumble. This is similar to what meat consumption does to the body.

We live in a meat-loving society therefore cutting something that’s always been a part of your diet can induce irritability and even mental fog.

When you’ve depended on something throughout your life and suddenly cut it out, there will be consequences. In this case its irritability and mental fog.

This is as considering the stress the body is put under while adjusting to its new reality. However, after the accumulated toxins have been released you will feel better and the mental fog goes away.

Meat is high in vitamin B12 and protein. These nutrients are vital in producing energy for the body. This therefore induces feelings of fatigue.

Remedying this is a problem considering the body absorbs iron from meat faster than it does any other food.

However, these nutrients can be found in foods such as spinach and iron-rich cereal.

This comes about once you get over your transition period and you’ve stayed consistent for a while.

Meat is high in saturated fat, which causes inflammation—excessive consumption of meat can cause chronic inflammation linked to stroke and heart attacks.

Plant diets on the other hand are anti-inflammatory. This is because they contain high amounts of fiber, antioxidant and phytonutrient content which counteract the effects of inflammation.

Plant diets are also low in inflammatory triggers such as saturated fat.

This happens after the detoxification period is complete, enabling you to enjoy the benefits of a meat detox.

Digesting meat takes a lot more energy that other foods. Coupled with saturated fats it also slows down your digestion.

However, according to studies, there is significant reduction in blood cholesterol levels among people on a plant-based diet.

This reduces your chances of contracting conditions such as high blood pressure or even diabetes.

Our bodies are filled with microbiome that aid in anatomic processes throughout the body. The food you consume is responsible for shaping the kind of microbiomes in your intestinal tract.

According to researchers, a plant-based diet can change your genetic predisposition to certain conditions.

For instance, a vegan diet changes genetic expression which is central to how our bodies repair damaged DNA. As such, it determines how susceptible you are to a disease.

According to studies, meat increases your chances of contracting diabetes. This is due to various contents found in meat i.e., nitrate preservatives.

These contents impair how insulin functions which affects blood sugar levels leading to diabetes. They also cause inflammation and weight gain.

By cutting meat from your diet, you do away with the unhealthy contents found in meat. Foods such as whole grain also equip the body against developing diabetes.

Consistent consumption a lot of times leads to excessive intake of protein. Excess protein is stored as fat which could to weight gain or illness such as heart disease.

Plant diets on the other hand round out your protein intake. If you’re meeting your calorie deficit you will get the appropriate amount of protein.

12. YOU MAKE AN ENVIRONMENTAL IMPACT

As subjective as this may seem there is enough empirical evidence to show consuming less meat impacts the environment.

In fact, according to some reports, as a result of excessive animal agriculture our oceans will be fishless by 2048.

WHAT SHOULD I EAT AS AN ALTERNATIVE TO MEAT?

Meat is a very rich source of protein. The fact that you’re undergoing a meat detox however doesn’t negate your need for meat.

As such, you can eat some foods to provide your body with the required levels of protein. They include:

A meat detox can be grueling but is very effective. Its effectiveness however is also dependent on the complimenting tools.

This means ‘cleaning’ other parts of your diet as well. As such, stay away from processed foods and if you’re going completely vegan, avoid animal products such as dairy and eggs too.