Weak lower back symptoms are primarily a result of a weak core. The core refers to the place the center of gravity is located within the body.

In other words, the spine, abdominal muscle, and hips region. As such, the core is like the engine room of a human’s body.

Therefore, when the core is weakened, there is bound to be a trickle-down effect on the body in general.

As a result, the body is prompted to react, which results in weak lower back symptoms. 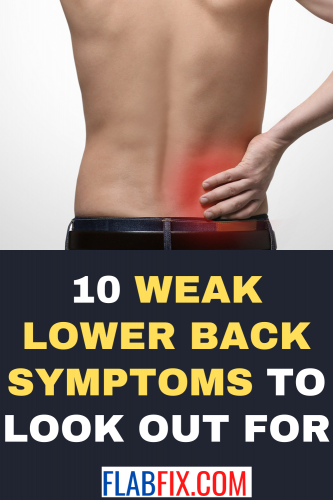 Some of the weak lower back symptoms include:

Lower back pain is the most common sign of a weak core. If your core muscles aren’t conditioned to engage when they’re supposed to, then your spine gets overworked.

As a result, your spine is often left overworked, and muscle tension thus builds up. This is what precedes the pain in the lower back.

2.INABILITY TO DO THE ‘STAND UP’ TEST

All you have to do is sit down on the floor. With as little assistance as possible from your hand or any other part of your body, try and get up.

The test is indicative of core strength, mobility, and coordination. As such, it points to the level of strength of your core muscles.

Proper posture and a strong core go together like peanut butter and jelly. Unusual analogies aside, poor posture is one of the more prominent weak lower back symptoms.

This could go from slumped shoulders to the inability to sit or stand straight. These are signs of poor posture, which is telling as a sign of a weak core.

The diaphragm is in part within the region we refer to as deep core muscles. Since the diaphragm is your main breathing muscle, it doesn’t engage right when the core lacks stability.

This creates a state of instability while breathing. As such, the diaphragm contracts to compensate, which makes it harder to breathe. Something most visible while engaging in physical exercise.

If you seek to remedy this, don’t just jump headfirst into other forms of exercise.

If anything, step back and learn how to engage your core correctly. Alternatively, during the low point of a routine, take 2-3 deep breaths.

Another way of checking for the stability of your diaphragm is the ‘hollowing’ test. All you have to do is take a deep breath.

As you begin exhaling, pull your stomach back to your spine. Hold this for ten seconds. If you can’t make it to ten seconds, you need some core work.

Your core muscles are responsible for stabilizing your entire body. As such, instability is often one of the more subtle weak lower back symptoms.

As mentioned before, poor balance is often very subtle. To determine whether or not you have low balance, take this test:

Stand on your toes by standing one foot with your eyes closed. After ten seconds, switch to the other foot. If you can’t hold this position for at least ten seconds, you probably have an underdeveloped core.

Standing is a reasonably straightforward procedure. Therefore, lacking the ability to stand for long periods can be pretty frustrating. Especially considering it’s one of the more common weak lower back symptoms.

It thus affects the majority of those with a weak core.

A weak core is responsible induces difficulty to stand for long periods as it leads to pain in the appendages. This includes weak core back pain, pain in the legs, knees, hips, and ankles.

Muscle weakness can be a sign of a depleted core. The core muscles provide stability and strength for muscle movements.

Therefore, weakness in areas such as the legs and arms may manifest a depleted core. With the core being the center of your muscular system, it will consequentially affect the rest of the body if you lack strength there.

We’ve all had those moments where we’re horsing around and use other people as a ‘crutch’ to get up. This, however, isn’t the case for everyone.

If you genuinely can’t get up without using something as a crutch, then something is amiss. In fact, it may be one of the weak lower back symptoms.

There are variations of how to do the plank. These variations conversely do not include sagging in the lower back, which is a common sight.

The plank can test core stability and be used to determine weak lower back symptoms. While doing a plank, a stable core ensures the lower back doesn’t overextend or sag.

If you have to spread your feet wider than your shoulder’s length, your core muscles can’t withstand small bases of support. An indicator of weak lower back symptoms

Weakness while performing exercises that involve throwing or jumping could be a sign of an untrained core.

As mentioned before, core muscles provide stability and strength to muscles. However, this type of weakness is throughout the midline, meaning it takes strength from your distal parts.

This results in the inability to performing tasks that involve throwing or jumping for long.

WHAT CAUSES A WEAK LOWER BACK?

A weak lower back is directly tied to the core muscle groups. All these groups perform equally important functions. As such, they are intermittently connected.

Therefore, when the core gets weak, all the muscles are likely not properly strengthened or mobilized.

Changes within the body, such as the increase of abdominal fat, affect the muscle group’s mechanics. Such changes in the mechanism are what instigate pain that seems abrupt, i.e., lower back pain.

HOW DO I MAKE MY LOWER BACK STRONAGER?

Strengthening your lower back might not be a glamorous, Instagram-worthy experience. However, it is essential to our lives, such as posture, mobility, and pain relief.

We look at 3 basic exercises you can engage in to make your lower back stronger include;

Vacuuming. As misleading as the name, the vacuum exercise is nothing short of effective. It particularly works on the transverse abs, which are key in supporting the spine and lower back.

Superman. This is a low impact exercise for the lower back. It ensures that you don’t go through any difficulties while performing the exercise if there’s an underlying condition.

It works the lower back and also engages your glutes, shoulders, and upper back muscles.

Bridge pose. It mostly works the gluteus muscles, which are one of the strongest muscles in the body. The gluteus muscles are critical as they stabilize the hip joints and lower back while walking.

Therefore, weakness in the gluteus muscles causes back pain as the spine gets overworked and lacks stability.

As such, exercises such as the bridge pose help provide stability needed to prevent lower back pain while strengthening it.

Weak lower back symptoms are simply evidence of a weak core. The core is critical to day-to-day activities.

This includes sitting, walking, and even jumping; it is thus practical to strive to engage in core strengthening exercises.

The exercises range from low impact to high intensity and can be done from the comfort of your home.