To have a strong core, you have to strengthen your oblique muscles (side abs).

Most people only target the rectus abdominis (front abs), not knowing that building the obliques will make their abs look better.

Now, don’t do these oblique exercises at the start of your workout because they’ll lower your performance in other exercises. Perform them at the end of the workout.

Quality is more important than quantity. So instead of doing 100s of reps of easy exercises, do few reps of the challenging oblique exercises. That said, build core strength with the simple exercises then advance to the harder exercises later. 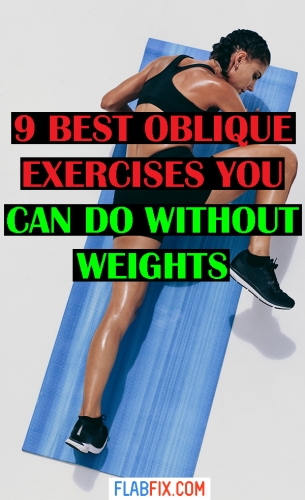 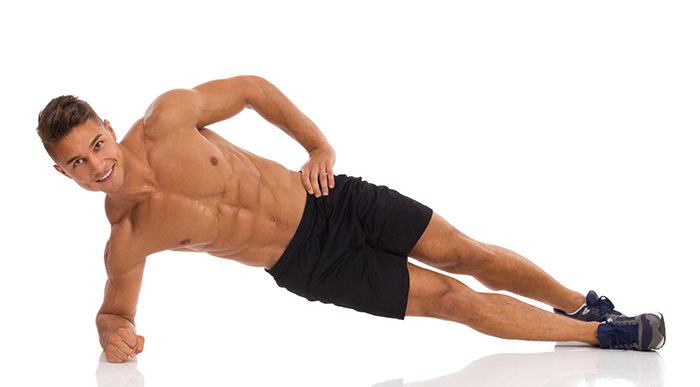 The side plank is a simple isometric exercise you can do anywhere. Time yourself to avoid giving before you reach your time-target.

Lie sideways and place your forearm on the floor (keep the elbow directly below the shoulders).

Place one foot on top of the other and then raise your hips off the floor.

Keep the hips, torso, and legs aligned in a straight line.

Tighten the oblique muscles to engage them more. And avoid sinking the hips.

Hold the side plank as long as you can, then turn the other side and hold the plank for the same period of time.

Instead of doing the side plank with the arm bent – straighten the arm and hold the plank in that position. Note that this variation requires more arm strength.

Lie sideways and support the upper body with one arm (keep it straight).

Keep the body aligned in a straight line and hold that position.

You can make this exercise challenging by lifting the top foot – that way, you’ll support the body with one arm and one leg.

Adding some movement to the side plank will engage the oblique muscles more.

Start in the side plank position (forearm on the floor).

Slowly lower the hips until they almost touch the floor, the raise them up slowly (as you squeeze them) until the body is aligned in a straight line and repeat.

Do the same number of reps for each side. 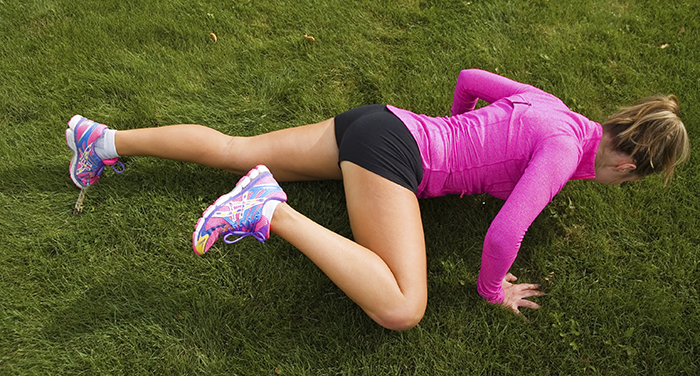 This exercise allows you to combine push ups and obliques workout. Do the superman pushups slowly and control your motion.

Start in the push-ups position with arms directly below the shoulders.

Lower yourself and bend the left knee sideways as you bring it towards the elbow.

Once the left knee touches the left elbow, return the foot to starting position and rise to complete the push-up.

Repeat the same movement with the right leg. And alternate legs after each rep.

If this movement is challenging for you – just pull the knee sideways until it touches the arm (without doing the push up).

This exercise requires balance, stability, and flexibility. It targets the obliques and the leg muscles.

Assume a shoulder-width stance, place hands behind your head and keep the elbows pointed sideways.

Tighten the abdominal muscles. Now, raise the left knee as high as you can while you bend the torso sideways until the left elbow touches the raised knee.

Slowly lower the left leg and straighten the torso. Repeat the same movement on the right side and keep alternating. 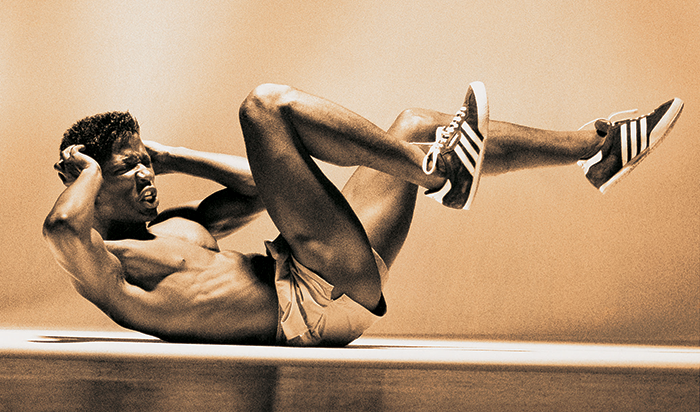 A study conducted by San Diego State University compared the effectiveness of thirteen common ab exercises and determined that bicycles were the best for stimulating the abs and oblique muscles.

Lie flat on your back and place your hands behind the head.

Then slowly lower the shoulders then straighten the left foot and repeat the movement with the other leg.

Keep the neck in its neutral position. Don’t pull it forward with the arms.

Make sure the elbow touches the opposite knee. Or bring them as close as possible if you’re not flexible.

The windshield wiper targets the lower abs and the obliques. Try this exercise once you’ve built core strength with easier exercises.

Lie flat on your back and place your hands beside the body.

Raise your legs until they’re at 90 degrees from the floor.

Keep the feet together and then move them to the left side until they almost touch the floor. Then raise the up and swing them to the right side.

Now, return them to starting position and repeat this movement.

To make this exercise less challenging, perform it with knees bent.

This one requires a lot of core and upper body strength. And it’s one of the most effective oblique exercises.

Grab a pull up bar at a shoulder-width grip.

Raise your legs until the hips are at a 90-degree angle. And keep the torso parallel to the floor (keep the elbows bent to help maintain this position).

Now rotate the legs from side to side. Bending the knees will make the exercise easier.

6. Knee tuck with a twist

Start in a push-up position with a shoulder-width grip.

Keep the core tight and the body aligned in a straight line.

Now pull in the left foot and repeat the movement.

This is a great beginner exercise, which almost anyone can perform. Don’t focus on it much though, advance to a harder variation once you can do 15-20 reps.

Lie sideways and keep the feet bent, one foot on top of the other.

Put hands behind your head and crunch as high as you can while concentrating on activating the obliques.

Slowly lower the upper body to starting position and repeat.

Note that your feet will slightly get off the floor if your core is weak.

The oblique v-ups are an advanced ab exercise – they require balance and core stability to execute.

Lie on your right side, and then lift the feet at a 45-degree angle from the ground.

Now lift the upper body off the floor as well (such that the body forms a V). Use the right hand to support the body if you lack balance.

Slowly lower the feet and torso to the floor at the same time. Then return them to the V position and repeat several times.

Don’t use the arm to push the torso off the floor – use the oblique muscles instead. The arm should only help you maintain balance. 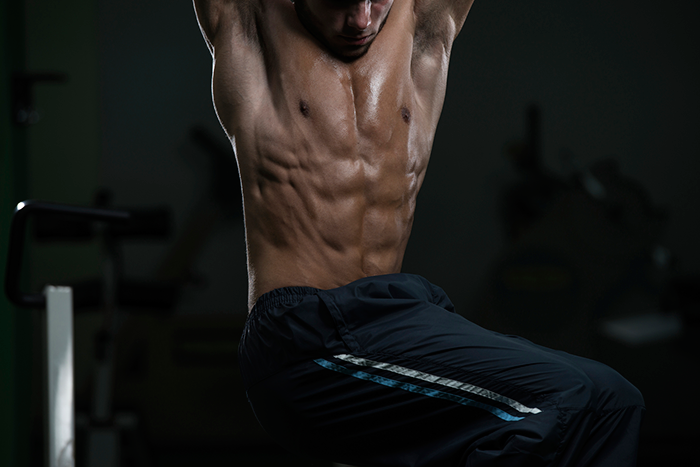 This exercise activates the obliques more than most exercises in this list. I recommend doing it frequently because it’ll also increase your grip strength.

Grab a pull up bar at shoulder width grip. Keep the knees bent.

Pull the knees up on one side as high as you can. Make sure you don’t swing – control the movement.

Squeeze the obliques for 2 seconds then lower the legs and lift them on the other side.

The core isn’t made up of the abs alone. The obliques, back, and glute muscles are also part of the core.

What is your favorite oblique exercise?