Are there any notable weighted jump rope benefits?

Jumping rope is one of the least fussy, easily accessible forms of exercise out there—a classic in its own sense.

But what happens when you amp things up by adding resistance through adding some weight to the jump rope. The addition of weights to a jump rope leads to the formation of a weighted jump rope.

A light jumping rope, also known as speed rope, has great benefits. However, like always in fitness, there comes a time when you have to up the ante hence the introduction of weighted jump ropes.

Let’s look at how impactful weighted jump rope benefits can be when added to your routine. 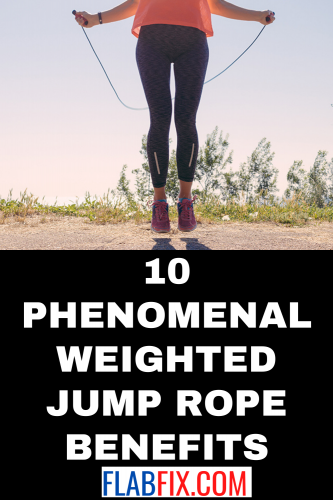 Look at it this way; it is much harder to jump a three-pound rope than jump a light, speed rope. Therefore, while jumping a weighted jump rope, you engage a lot of muscles throughout the body.

This facilitates a high energy consumption rate, thus leading to the burning of high amounts of calories.

Weighted jump rope benefits you, therefore if you’re looking to cut down your calorie levels.

No matter how old you are, chances are jump ropes have been at some point in and around your life.

So, although the prospect of jumping weighted jump ropes may seem daunting, the principles remain the same.

If anything, weighted jump ropes are easier to get the hang of. A lot of times, speed ropes trip you up or get annoyingly tangled.

Weighted jump ropes ensure that the rotations are slowed down just enough to ease you in.

The addition of weights to a speed rope creates resistance, which is the basis of any strength training exercise. A weighted jump rope ensures that weight is evenly distributed throughout the jumping rope.

One of the biggest challenges to staying consistent with workout routines is finding the time to work out when moving.

However, if you build your routine around equipment such as the weighted jump rope, you’re never disrupted. If it means you travel a lot, you can carry it with you. All you have to do is find the space.

As such, you get to enjoy weighted jump rope benefits from wherever.

The instigated resistance from the weights on the weighted jump rope creates a certain amount of force. The task of controlling this force is thus left to the muscles.

Doing this constantly develops high levels of muscle control. Muscle control is intertwined with muscle strength, which improves on things like body composition.

As mentioned above, weighted jump rope engages multiple muscles, which expends more energy. Expending such amounts of energy meaning the heart gets to work overtime.

This is because the heart has to pump at a faster rate than accustomed. After a while, this leads to the strength of heart muscles such as the arterial walls. This, therefore, improves cardiovascular fitness.

These weights give you the option of switching the intensity of your workout from high to low and vice versa. In the end, you come away having had a versatile workout. An approach that is beneficial in the long run.

Jumping weighted jump ropes can be used as a strength training exercise. The resistance the weights generate ultimately leads to the burning of fats.

Fat deposits are burned as energy to facilitate the production of energy to perform this exercise. Due to the shedding of extra fat deposits, the strengthened muscles thus bulk fat-free.

When jumping rope, however, the shoulder is forced to contract and stabilize. The contraction and stabilization are prompted to control movement in the interlinked area, such as the lower arms.

Add the weight that comes with a weighted jumping rope, increasing the rate at which the shoulder develops.

One of the reasons why jumping rope is such a tiring exercise is the number of muscles engaged. This, in turn, leads to a steep demand for energy hence the tiredness.

The resistance engendered by the weights engages multiple muscles in the upper and lower body. Some of the upper body muscles engaged include the arms, back, shoulders, and core.

HOW LONG SHOULD YOU JUMP ROPE?

Weighted jump rope benefits are commensurate to the amount of time you spend doing the exercise. This, however, doesn’t mean running yourself to the ground.

To attain the full weighted rope benefits, you have to pace yourself. This means conducting an assessment of various things.

This includes your current fitness levels, personal goals, and history with an injury. Based on the answers to these questions, you can then decide on a convenient timeframe.

For instance, you could either jump rope every day for about 20 minutes or twice or thrice a week.

HOW HEAVY SHOULD MY WEIGHTED JUMP ROPE BE?

The weight of the weighted jump rope you use is similar to what I’ve mentioned above. Your personal goals, history with injury, fitness levels, and skill level.

There are varying weights that depend on things like the intensity of the workout you’re going for. The size of the weights ranges from a quarter pound, half a pound, a pound, two pounds, and so on.

If you’re just starting on jumping rope, opt for the lesser loads. However, if you’re starting out jumping but have experience in other forms of exercise, it’s okay to start a little higher.

Weighted jump ropes are as easy as it gets when it comes to starting. It can be low impact or high impact and is easy to start.

This means it’s a form of exercise that can be done by people across many age groups. It is also a bit more pocket friendly.

When you weigh up the cost vis a vis the benefit of getting into jumping weighted rope, let this tip the scale.