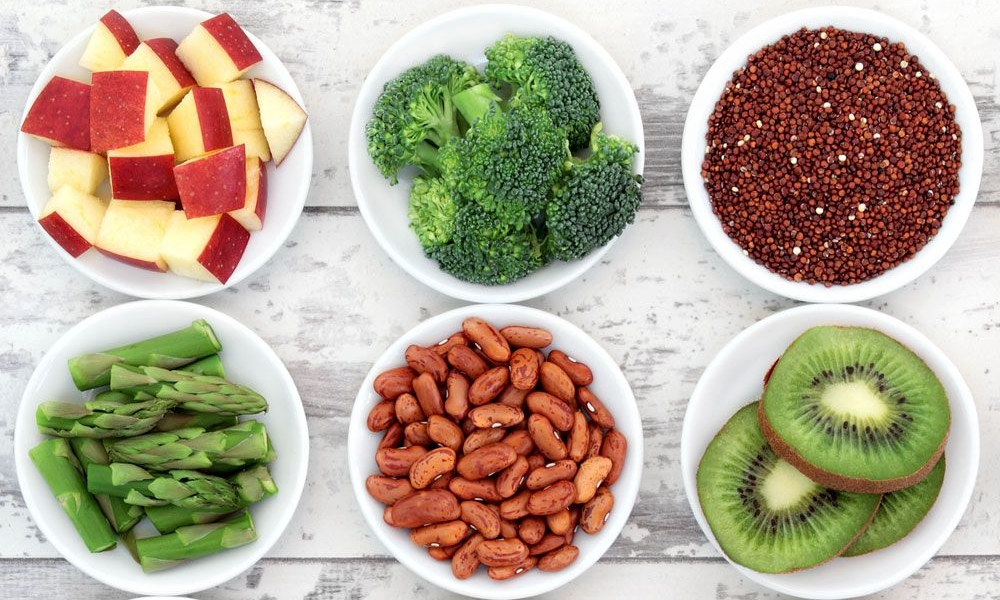 By Naomi W
In Wellness
0

Your slow metabolism could be the reason you are not shedding belly fat. In which case, you need to add foods that boost metabolism for flat stomach to your diet.

Mayo Clinic defines metabolism as the process in which your body converts whatever you eat and drink into energy.

The energy required to perform the aforementioned functions is called the Basal Metabolic Rate (BMR).

Everybody’s BMR is not the same because one’s BMR is dependent on their age, gender, size, and genes. Some people burn fewer calories than others (lower metabolism).

But for you to get rid of unwanted body fat, you need to have a high metabolism to burn a high number of calories.

The good news is that there are certain foods that you can consume, which can significantly increase your metabolism.

Here is a list of 20 foods that boost metabolism for a flat stomach.

20 FOODS THAT BOOST METABOLISM FOR A FLAT STOMACH 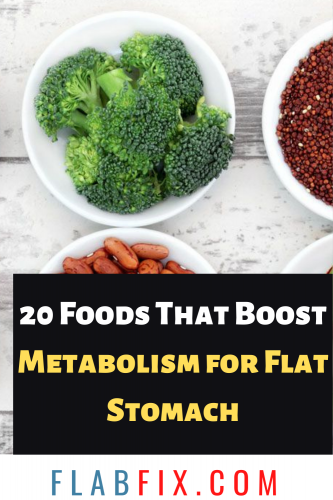 Protein-rich foods like legumes, nuts, fish, meat, and seeds are among the foods that boost metabolism for flat stomach.

This is because they require a lot of energy from your body to get digested.

According to research, foods rich in proteins increase your metabolic rate by 15-30 percent, carbohydrates 5-10 percent, and fats 0-3 percent.

Protein foods also help your body to maintain muscle mass. They also induce satiety, which prevents you from overeating, making them the best foods that boost metabolism for flat stomach.

Another set of foods that boost metabolism for flat stomach iron, zinc, and selenium-rich foods. They are required for the proper functioning of the thyroid gland, which regulates metabolism.

This research shows that failure to consume enough foods rich in iron, zinc, and selenium can affect hormones produced by the thyroid gland.

This is bound to reduce your metabolism significantly.

Some of the iron, zinc, and selenium-rich foods you can include in your diet include meat, seafood, legumes, nuts, and seeds.

Chilli peppers have capsaicin, a chemical that boosts your metabolism because it increases the calories and fats you burn.

20 research studies from a medical database reveal that capsaicin can enable your body to burn 50 calories per day.

Whether you take 9mg or 150 mg of capsaicin in a day, the results will still be the same.

A 2013 study shows that taking 2 mg of capsaicin before meals reduces the number of calories consumed, especially those from carbohydrates.

Research shows that caffeine in coffee can potentially increase your metabolism by 11 percent. Another study shows that taking 270 mg of caffeine or three cups of coffee can help you burn up to 100 calories every day.

The caffeine in coffee could also give you a boost of energy, especially during your workout, because it burns fat and, in the process, produces energy.

Caffeine and catechins found in tea also boost your metabolism.

In particular, oolong and green tea increase your metabolism by 4-10 percent, which burns approximately 100mg calories in a day.

Studies show that oolong and green tea effectively burn extra fats to provide energy in your body. These two types of teas increase your fat-burning abilities by 17 percent.

Coconut oil packs many medium-chain triglycerides (MCTs), making it one of the best foods that boost metabolism for flat stomach.

Once the MCTs are absorbed, they are not stored as fats, but they end up in your liver, which turns them into energy.

MCTs, increase the metabolic rate as compared to longer-chain fats. According to a study done on obese individuals, taking 30 ml of coconut oil daily can reduce your waist size.

In one study, obese rats that were given vinegar produced some genes which reduced liver fat and belly fat storage.

Apple cider vinegar can also help you lose weight because it causes a feeling of satiety.

According to a study in humans, those given four teaspoons (20 ml) of apple cider vinegar ate 275 fewer calories the rest of the day.

Taking too much could induce nausea.

Another food that boosts metabolism is water. Studies show that water can increase metabolism by 24-30 percent.

40 percent of that increase is attributed to the additional calories needed to heat the water to body temperature.

On average, high metabolism lasts between 60 and 90 minutes.

Another type of food that boosts metabolism is cacao and cocoa.

One study in mice shows that cocoa and cocoa extracts produce genes that promote the use of fat for energy. This was the case for mice that were fed high fat or high-calorie diets.

Nonetheless, cocoa could stop enzyme-action, which is necessary for fat and carbohydrate breakdown during digestion.

Certain spices are among foods that boost metabolism for flat stomach.

For example, when you mix about 2 mg of ginger powder in hot water, you will take it together with a meal and burn 43 more calories than ordinary water.

The hot ginger also enhances a feeling of satiety. A group of people who were given 40 mg of grains of paradise burned 43 more calories in two hours as compared to those given a placebo.

The addition of cayenne powder to your meal increases the amount of fat your body burns to produce energy.

The fat-breaking mostly applies to those not accustomed to consuming spicy food.

Legumes and pulses are another type of food that boosts metabolism. Because they are high in proteins, they require many calories for them to be digested.

A group of people consumed a legume-rich diet for eight weeks in a controlled study, and the results were that the group lost 1.5 times more weight than the control group.

Legumes also contain an amino acid called arginine, which increases the number of carbohydrates and fats your body can burn.

Peas, faba beans, and lentils contain an amino acid called glutamine, which boosts the number of calories burned during digestion.

Foods rich in omega-3 are thermogenic; hence they increase metabolism. The foods increase the body’s fat-burning enzymes, which then lowers the levels of stored fats.

This will, therefore, enable you to have a flat stomach.

Some of the foods that contain omega-3 include sardines, salmon, mackerel, flaxseeds, almonds, walnuts, and chia seeds.

Another type of food that boosts metabolism are foods rich in fiber. Fruits and vegetables rich in fiber leave you feeling fuller. The food is converted into energy, which facilitates weight loss.

Seaweed (red, green, brown marine algae that grow along the seashores) is another type of food that boosts metabolism.

This is because it contains iodine, responsible for producing thyroid hormones and proper functioning of the thyroid glands.

One of the core functions of thyroid hormones is to regulate the metabolic rate. In a day, an adult should consume about 150mcg, which can be gotten from several seaweed servings.

Kelp, which is a type of seaweed, contains a high iodine-content. Therefore, take it in small quantities.

Brown algae, a type of seaweed, contains fucoxanthin, which increases metabolism. Research shows that fucoxanthin has anti-obesity effects as it increases the number of calories you burn.

Cucumber is another food that boosts metabolism. This is because it contains flavonoid antioxidant quercetin, which reduces swelling and has 96 percent water content.

This, therefore, means that cucumber can prevent bloating.

Other than potassium, bananas have resistant starch, which your body digests slowly hence keeping you fuller for longer.

Resistant starch prompts your liver to start burning fats, which increases your metabolism.

Besides being a rich in Vitamins A, C, E, and folate, Papaya also has an enzyme called papain.

This enzyme helps your body break down difficult to suggest foods that protect you from inflammation and a bloated belly. This, therefore, aids you in getting a flat tummy.

Whole grains contain a filling fiber, which helps in digestion and encourages satiety.

In one study, women who consumed a diet rich in whole grains presented a 49 percent lower risk of weight gain.

It contains soluble and insoluble fiber, which your body digests slowly hence keeping you fuller for longer.

Asparagus aids in the removal of water and waste, which eases discomfort and bloating.

Asparagus also contains prebiotics, which feed the healthy bacteria in your gut.

Yogurt is also good for your gut. The presence of probiotics in yogurt strikes a balance in microflora, thus preventing bloating.

Because it contains 17 mg of proteins, it leaves you with a feeling of fullness.

The above foods will help you trim your waistline by increasing your metabolism, reducing your bloating, and equipping your body with the right nutrients to lose weight.